rDNA ITS based identification of Eukaryotes and their communication via DOIs

In December 2019 NEFOM was funded with 182 000 SEK from SNS and ForBioeconomy for new activities during 2020 under the theme "back to the roots".

May 4, 2017: Call for Citizen Scientists "Submit specimens for sequencing!"

Summer 2010: The proportion of reverse complementary ITS sequences in INSD is growing rapidly, with potentially detrimental effects for the unaware user. We have developed a software solution which we aim to have up and running in UNITE by the end of August 2010.

As per April 2010, PlutoF gives the user the opportunity to extract (locate) ITS1 and ITS2 from (in) fungal ITS sequences. A version for the ribosomal small sub-unit (SSU/16S/18S) is on the way.

As per March 2010, PlutoF now offers generic support for chimera tests of full-length fungal ITS sequences.

In February 2010 the new 454 pipeline for analysis of fungal ITS sequences was added to UNITE.

As per March 2009, support for UNITE ITS sequences from environmental samples (such as soil, ectomycorrhizal roots, orchids etc.) is enabled. You can include sequences with good metadata (like host, locality, habitat, and soil parameters) in your BLAST and galaxieBLAST runs by clicking the 'Envir.' box next to the 'Submit' button. Current number of fungal ITS sequences from environmental samples in UNITE: 7123

As per May 2006, support for INSD (GenBank, EMBL, DDBJ) ITS sequences is enabled. This means that you, in a single BLAST run, can compare your sequences with those in UNITE and INSD. (This pertains to galaxieBLAST as well.) All you have to do is to click the 'INSD' box next to the 'Submit' button; of course, not clicking this button is tantamount to running against UNITE data only. We use emerencia technology (PDF) for the INSD support; all properly annotated INSD fungal ITS sequences should thus be indexed and kept regularly updated (twice a week).

As of November 2005, galaxieBLAST and galaxieHMM support sequences that unintentionally were pasted reverse complementary (?revcomp?). They do this by pattern matching to the first 30 bp of the 5.8S region - unless a sequence features the pattern, the pattern will be looked for in the revcomp of the sequence. If the revcomp of the sequence features this pattern, the analyses will proceed with the revcomp of the sequence. If not, the analyses will proceed with the initial sequence (regardless of the fact that it did not feature the pattern). Thus, partial sequences lacking, say, ITS1 and 5.8S, should also be admissable. We do not anticipate any major complications with this approach - but please inform us of any problems you encounter. However, as explained elsewhere, the galaxie tools are tailored to work on full-length (as opposed to partial) ITS sequences, and you really should use the regular BLAST function of UNITE if you have only a portion of the ITS region available.

May 23-24, 2016: BE Workshop I - Annotating public fungal ITS sequences from built environment according to the MIxS-Built Environment standard (Gothenburg, Sweden).

Primers for amplifying and sequencing fungal rDNA ITS region

To identify ectomycorrhizal (ECM) fungi, ITS1-ITS4, ITS1F-ITS4, and ITS1F-ITS4B are the most widely used primer pairs for PCR. However, using default annealing temperature of 55 degrees centigrade, we have met several difficulties using all of the primer pairs mentioned above.

ITS1 or ITS1F together with LR21 appear the most promising primer combination that does not co-amplify plant DNA. These primer pairs amplify nearly all ECM fungi, typically resulting in some 850-900 bp PCR products. 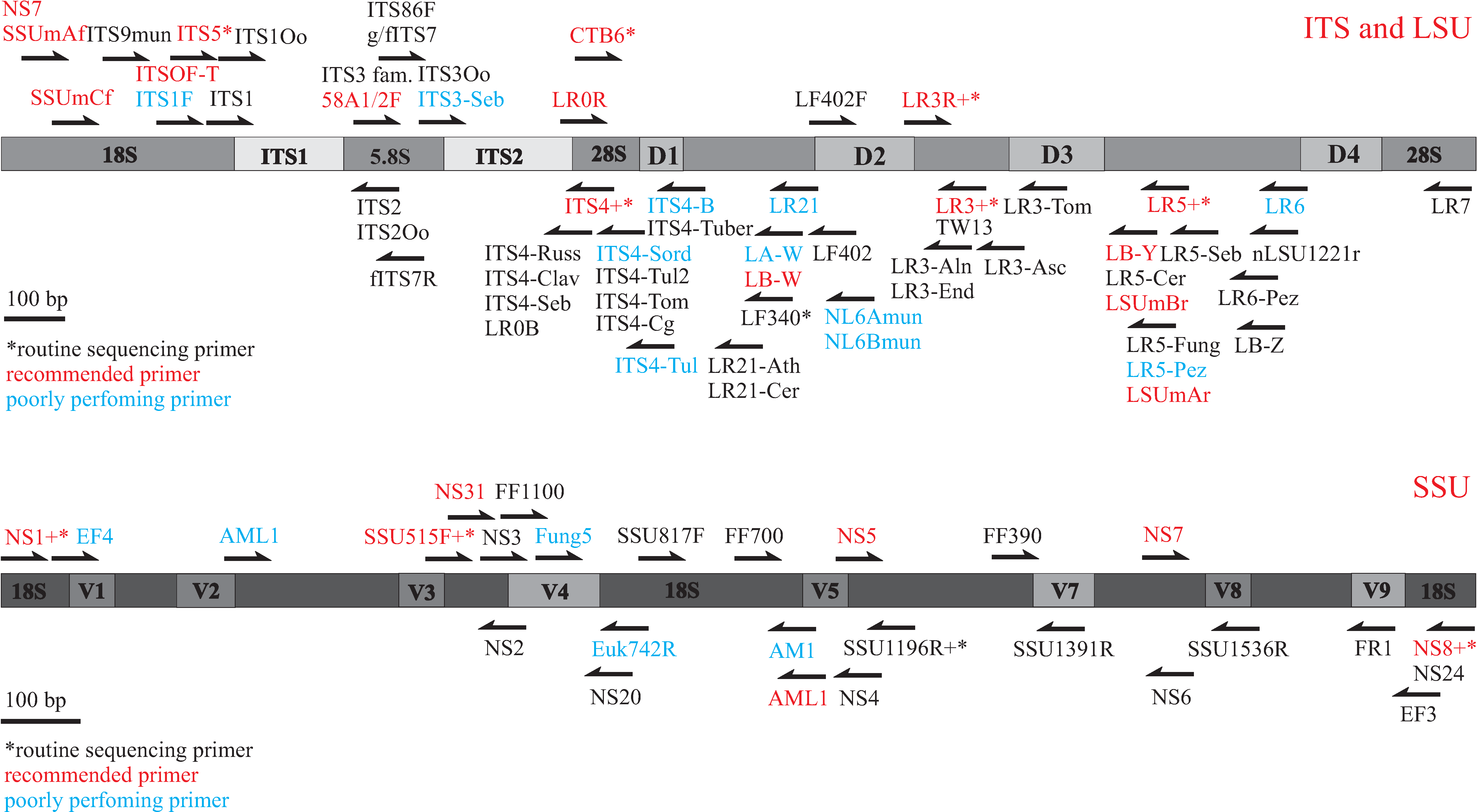 In sequencing we have usually applied primers ITS1, ITS2, ITS3, ITS4. ITS2 and ITS3 usually give the best chromatograms. In case of amplification using primer pair ITS1(F)-LR21, ITS3 gives ca 550 bp sequence, covering both ITS2 and ca 200 bp of 28S rDNA. The latter offers more taxonomic opportunities in cases where ITS2 is not matched by other taxa. Sequencing the whole 850 bp with primers ITS1 and LR21 appears to be one of the best solutions.